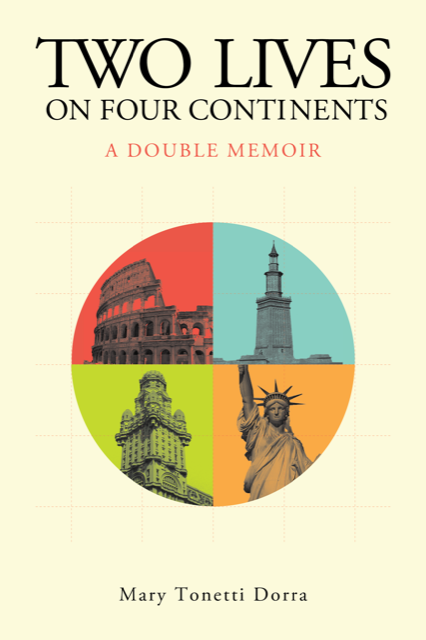 In Two Lives on Four Continents a Double Memoir readers will travel from Alexandria, Egypt to Paris and to Washington DC, and from Fort Worth Texas to Central and South America to Italy.  Throughout, they encounter everything from nations experiencing monumental change to the personal discoveries of education, from the cruelties of anti-Semitism and xenophobia to the excitement of the art world.  Put simply, this book presents the broad canvas of history in the 20th century, all the while leading its two main characters together, and to love.

“Two Lives on Four Continents is as much an epic travelogue as an intimately engaging memoir. Through compelling episodes and amusing anecdotes, it follow the intersecting paths of two extraordinary yet asymmetrical lives. The author has a keen eye and ear for telling detail in recreating the complex circumstances in which she and her gifted, art historian husband, Henri, somehow managed to flourish. They negotiated a racist American South and anti-semitism in the Middle East, France, England, and the United States, before and after the Second World War. In the end, the book is a joyful exploration of the rich intellectual and cultural life that the Dorras found and created together.”
Larry J. Feinberg
Robert and Mercedes Eichholz Director and CEO
Santa Barbara Museum of Art

“Two Lives on Four Continents is a dazzling look back at a vital slice of the last century and an intimate narrative of two ambitious young people making their way in a chaotic world, and making their way toward each other. Romantic and captivating, Mary Dorra’s double memoir is a delight.”
Lily King
lilykingbooks.com

“I started reading Two Lives on Four Continents a Double Memoir Friday and couldn’t put it down. It is a really wonderful read, and Mary Dorra’s selection of what to tell and how to tell it is impeccable.
Two extraordinary lives, beginning from the farthest points imaginable in Alexandria and Fort Worth, converge in Los Angeles in the 1960s. The author tells this compelling story of one of the more accomplished museum professionals and scholars of his generation, Henri Dorra, and her own rich and varied career, through a series of deftly chosen episodes. The result is compulsively readable, and an astonishing window on the tragedies of WWII and the opportunities that followed. The two come to life as characters in their own stories, along with illuminating insights into a dizzying array of people and places.”
Bruce Robertson
Professor Emeritus, History of Art and Architecture
Director Emeritus, Art, Design & Architecture Museum
University of California, Santa Barbara

“Brimming with optimism, this memoir recounts two lives lived to the fullest. The story of Mary manifests a remarkable capacity to enjoy life and a fearless openness to new experience and adventure. Here is a woman who appreciates the finer things in life, while also recognizing its challenges. The story of Henri reveals a cultured, forward-looking man, striving for his place in his adopted country. And we are captivated as they embrace life and each other.”
Anitra Sheen
Author of Things Unspoken, Chronicle Books, 1999

“Two Lives is the captivating, humane, beautiful story of two creative individuals who found each other. Told through a series of segments that reconstructs the thoughts and challenges faced by Mary Tonetti and Henri Dorra the book provides ample evidence for why they chose certain paths for their lives while providing often moving glimpses of episodes and people that influenced the ways in which they made informed decisions. The book deserves to be read, even cherished, since it is an original way to present the history of both individuals in a meaningful way that will grab the reader to finish the essays without putting the book down. This is a must read.”
Gabriel P. Weisberg
Professor Emeritus of Art History, University of Minnesota